Equipment
2000: Tommy Löfgren started the company Naturgis AB consultancy in GIS field, ADVANCED map production
with the help of remote sensing, and production of landscape and vegetation data with relation to conservation issues. The equipment is an analytical stereo plotter and software for the production of vector and raster data – as well as GIS analysis (ArcGIS, Supermap and ERDAS Imagine) and software for digital photogrammetri, ortofoto produktion and 3D data production (Delta DPS) and the OruxMaps for Android for field use.
SuperMap is.net is also available in order to lay out dynamic maps and GIS information on the Internet.

GIS (Geographical Information System)
A digital map is made of geometrical data and tables. You could say that GIS is (possibilities to combine) statistical information that is defined geometrically (e.g. X, Y and altitude defined in the Swedish RT90 projection). If you have geometry you can combine any number of tables to the geometry but you can also combine and manipulate geometry in different ways. You can combine maps in different ways, analyse the resulting data and automatically get statistics describing changes in the landscape. The result can be published in thematical maps, tables or diagrams. 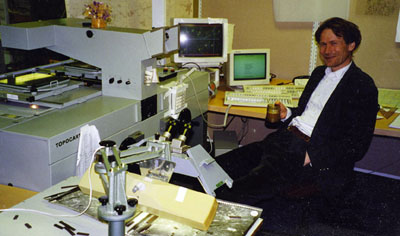 One mapping method I’m using is to directly digitalise on an analytical plotter (analytical stereo element) of the brand TOPOKART. The instrument is initially an analogue stereo instrument but has been rebuilt to produce digital data. The starting orientation is done with helping software, QASCO, on a separate computer. A stereo model is the area where two aerial photos overlap (normally by 60%). The aerial photo interpretation is made in this three dimensional photo model. The starting orientation of the stereo models is made in four steps; pre-, inner-, relative- and absolute orientation. At the absolute orientation a model file is created that aided by the fix points (see below) describes the transformation between TOPOKARTENS coordination system and the Swedish RT90 system. The model file uses a “lens file” that corrects different geometrical peculiarities in the specific camera lens that was used for the pictures in the model. When the lenses of the photos aren’t included in the lens file the file has to be updated (see the evaluation of technics). At the digitalization coordinates are sent according to the Swedish RT90 system to another computer where the mapping software SOSMAP is installed. At the same time as surfaces are outlined in the stereo mode on the TOPOKART these objects are visible at the monitor of the SOSMAP computer (in for the project selected ways). This means that the results doesn’t, like e.g. in the Zeizz Plaincomp P3, show at the same time as digitalising, mirrored into the stereo model (dynamic mirroring), but only shows in the monitor on the side. Instead the software MAPPLATE (in the SOSMAP package) provides a possibility to, on transparent drawing film, plot out the digital data base in a separate image’s central projection. This is called “static mirroring”. The model file and the lens file make the calculation of a separate image’s projection possible. The static mirroring in high degree simplifies updating and could in this project be used to update the interpretation of the elder/small scale photo material with the interpretation performed in the newer larger scaled photo material. I an other software module in SOSMAP normal plot files can be extracted out of the digital data base in the Swedish RT90 projection and at any scale. In this environment both (elder) black and white photos and modern CIR photos (Infra Red Photos) can be interpreted and the result of the interpretation is directly transformed into a digital data base.